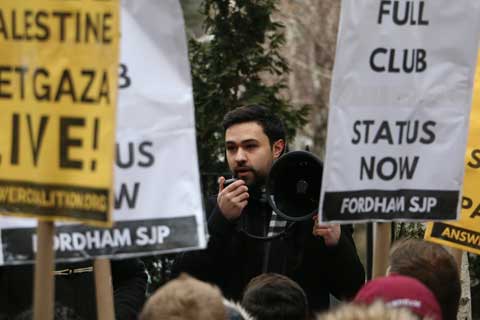 On January 26, Fordham University, a private Jesuit university in New York City, reaffirmed its ban on Students for Justice in Palestine (SJP). In a letter to civil rights groups, Fordham stated its decision to ban SJP was made because the group had a “singular focus of which is the political agenda of one nation,” “is more akin to a lobbying organization,” and that SJPs on other campuses were “disruptive.”

The letter notes that students interested in starting SJP at Fordham had repeatedly declared their complete independence from National SJP and SJP chapters on other campuses, that NSJP’s own website states that SJPs are autonomous, and that it is not clear what “disruptive” activity NSJP — or any other SJP chapter — has engaged in that would violate Fordham’s code of conduct, as Fordham’s letter provided no specifics.