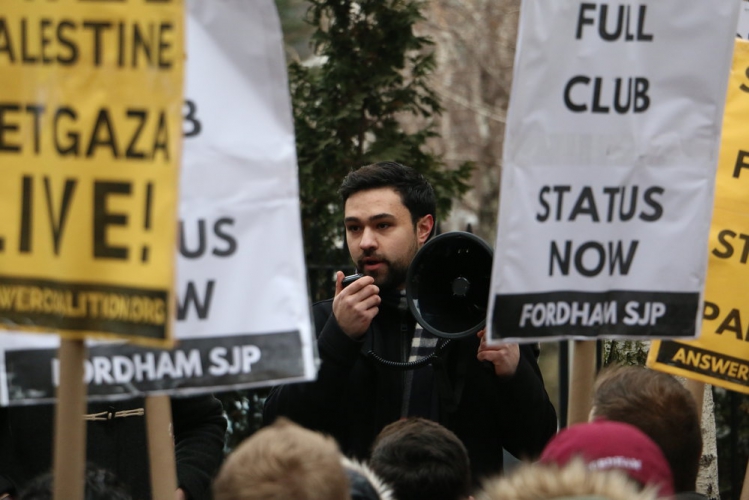 original image (1000x667)
January 26 – Palestine Legal and the Center for Constitutional Rights (CCR) wrote Fordham today after it reaffirmed its ban on Students for Justice in Palestine (SJP). In a letter to the civil rights groups late last Friday, Fordham stated its decision to ban SJP was made because the group had a “singular focus of which is the political agenda of one nation,” “is more akin to a lobbying organization,” and that SJPs on other campuses were “disruptive.”

In Healy v. James, the Supreme Court held that the denial of student group status based on the actions of a national group violates associational rights under the First Amendment . . . Denying SJP club status at Fordham based on actions of the national group or other chapters violates the free speech and associational principles to which Fordham promises to adhere. Moreover, it appears that Fordham’s banning of SJP on the basis of allegations of activities of other chapters is a standard that only applies to SJP.

The letter notes that students interested in starting SJP at Fordham had repeatedly declared their complete independence from National SJP and SJP chapters on other campuses, that NSJP’s own website states that SJPs are autonomous, and that it is not clear what “disruptive” activity NSJP – or any other SJP chapter – has engaged in that would violate Fordham’s code of conduct, as Fordham’s letter provided no specifics.

The Foundation for Individual Rights and Education (FIRE) and the National Coalition Against Censorship (NCAC) also called on Fordham to recognize SJP, noting that

The letter from Palestine Legal and CCR also points out that Fordham failed to respond to the concern that the university engaged in discriminatory conduct, in violation of Title VI of the Civil Rights Act by denying Ahmad Awad, a Palestinian-American who has since graduated, the opportunity to share his culture, history and story of his family’s homeland on an equal basis as other students at Fordham.

As Ahmad recently explained: “I was devastated to discover that Fordham would prohibit SJP — and, even worse, do so not because of any bad behavior, but simply because of what it represents on paper.”

Palestine Legal
http://palestinelegal.org/
Add Your Comments
LATEST COMMENTS ABOUT THIS ARTICLE
Listed below are the latest comments about this post.
These comments are submitted anonymously by website visitors.