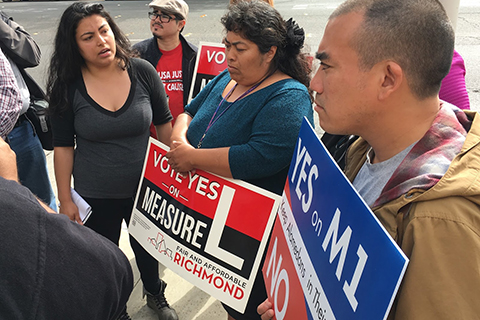 Many long-time Bay Area residents have been displaced over the last several years. The stock of affordable housing options continues to dwindle and the median rent in Oakland is now $3,000 a month. Heartless landlords are taking extreme measures to boost their profit at the expense of tenants. In one recent example, an East Palo Alto property owner and his son were arrested for a plot to push tenants out of rent-controlled units by destroying their property.

With a chance to put a damper on the housing crisis, six Bay Area cities will vote on renter protection measures this November 8. In Oakland, a grassroots effort to strengthen outdated tenant rights laws led to Measure JJ being placed on the ballot. In the city of Alameda, where it took more 7,300 registered voters to place Measure M1 on the November ballot, the fight for renter protections has been fierce. In Richmond, with Measure L now on the ballot, the struggle for renter rights is a battle against the the California Apartment Association (CAA) and its corrupting influence on local politicians. In San Mateo, activists collected more than 11,000 signatures to place Measure Q on the ballot. In Mountain View, activists and renters are urging voters to approve Measure V to protect over 14,000 households. In Burlingame, renters fought to bring Measure R forward for a vote in November.

The California Apartment Association is running attack ads against the renter protection ballot measures in Richmond, Alameda, Mountain View, San Mateo and Burlingame. After the East Bay Rental Housing Association, an affiliate office for the CAA, sent a a deceptive anti-rent control mailer, tenant rights groups protested and filed a complaint with the state Fair Political Practices Commission. While landlords and the CAA try to stop the renters' movement, tenant advocates across the Bay Area urge voters to support the strong renter protections in Richmond, Oakland, Alameda, Burlingame, San Mateo, and Mountain View, and to vote “no” against weak proposals placed on the ballot by the City Councils in Alameda and Mountain View.