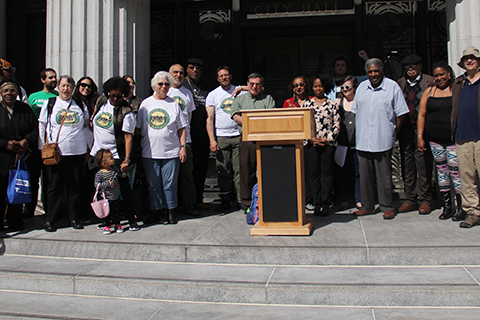 Community activists working independently on separate ballot measures have come together under the umbrella of the Oakland Justice Coalition. Together, the three measures they propose would radically transform police accountability, renters' rights, and the minimum wage in Oakland. On March 24, Oakland Justice Coalition members made a formal announcement of their intentions in front of Oakland City Hall. The canvassing kickoff will be held near the West Oakland BART station at 11am on April 2.

The Coalition for Police Accountability's ballot measure establishes a Police Commission with the power to discipline officers and fire the chief of the Oakland police department.

The Oakland Livable Wage Assembly proposal raises the minimum wage in Oakland to $14 an hour this year and $20 an hour by 2020, as well as mandating fair scheduling by employers.
The Biggest, Baddest, Most Badassed Minimum Wage Proposal in the Country | Oakland ballot measure proposes to raise minimum wage to $20/hr by 2020