Scott Sternberg of Beverly Hills is behind Richmond’s mass evictions

by Lynda Carson (tenantsrule [at] yahoo.com)
According to records with the Secretary of State in California, Scott Sternberg the owner of Creekview Condominiums, has a brokers license that has expired. Thats right. Scott Sternberg, has not had a valid real estate license in California since 8/3/1992, according to records. However, he is evicting people by the hundreds at Creekview Condominiums in Richmond, without a valid real estate license!
Scott Sternberg of Beverly Hills is behind Richmond’s mass evictions

Scott Sternberg of Beverly Hills, the owner of PMI Property, who resides in a Beverly Hills home worth $9,057,193 according to Zillow, is conducting mass evictions at the Creekview Condominium apartment complex in Richmond. The latest round of evictions are occurring shortly before the voters of Richmond get a chance to vote for renter protections including just cause eviction protections, and rent control.

According to records with the Secretary of State in California, Scott Sternberg the owner of Creekview Condominiums, has a brokers license that has expired. Thats right. Scott Sternberg, has not had a valid real estate license in California since 8/3/1992, according to records. However, he is evicting people by the hundreds at Creekview Condominiums in Richmond, without a valid real estate license.

Allegedly, Scott Sternberg has closed over $500 million in office, shopping center, industry and apartment properties since 1978, despite the fact that the records reveal that Sternberg, owner of the Creekview Condominiums, has been operating with an expired brokers license since 1992.

Creekview Condominiums, a 200 unit apartment complex used to be known as the Creekview Apartments, and people definitely have had some comments about the rental properties recently, and through the years. Even though it is listed as being in El Sobrante, Creekview Condominiums is actually located in Richmond, and some of the mass evictions there started back in 2014, according to the Richmond Confidential.

A number of years ago, local Berkeley attorney Jeffrey Carter has represented around 169 of the renters at Creekview Condominiums/Creekview Apartments, and allegedly it was for many of the same issues (water issues) that have cropped up again, at the housing complex that has around 194 to 200 rental units.

According to sources there are around 25 to 30 residential units in each of the buildings involving mass evictions at Creekview Condominiums, and on July 29, tenants were served notices to vacate (eviction notices) their homes in buildings A, B, and E.

Indeed. Just in time before the renters have a chance to vote on renter protections in Richmond next November, wealthy millionaire real estate investor Scott Sternberg of Beverly Hills, decided to have the tenants at 3535 El Portal Drive (Creekview Condominiums), evicted from their long-time homes.

On July 29, the tenants at Creekview Condominiums received a 3 page notice, in addition to a 2 page 60 Day Notice to evict, dated July 29, 2016. The letter and eviction notice was served to all the renters in buildings “A”, “B”, and “E”. The letter states that due to poor construction of the buildings back in 1990, they discovered a significant water intrusion issue in building H during December 2014, and therefore the tenants must be out of their apartments by September 30, 2016. The letter also mentions that the tenants in buildings “C”, “D”, and “H”, are already facing eviction, and displacement from their housing.

There is not any mention in the notices that the tenants will receive any kind of relocation assistance or that the tenants have the right to return to their apartments they are being evicted from.

Confusing the mass eviction situation a bit more, is the fact that there were some ads trying to lure people into renting apartments at Creekview Condominiums that were posted on the web as recent as April 18, 2016, and July 1, 2016. It is possible that the right hand at PMI Property does not know what the left hand is doing. Perhaps it may be possible that management is involved in the eviction-for-profit scheme, by getting new tenants to continue to pay the bills at the property right until the point that they are facing eviction over well known water issues, and mold issues at the housing complex.

Issues according to state law, that should have been remedied by the landlord long ago, without using the ruse of “constructive evictions” as a way to force all the tenants out of their housing at the complex.

In addition to the mass evictions taking place, Dennis Genova, of property management at Creekview Condominiums threw a political bomb shell at the tenants and the progressive City Councilmembers of Richmond by stating in the July 29 letter that, “Many of you are aware of the political positions related to the “fix” required, as set out in some dramatic statements by a politician at the City suggesting that Creekview Condominiums was virtually throwing people out on the streets during the holiday season in order to vacate units and then release them at higher rents and thus, a large profit for the ownership. Based upon the 18 months of vacancy at Building “H” and Buildings “C” and “D” (not to mention the cost of the reconstruction), it is clear that those public remarks were both fallacious and border on defamation.”

A check of the public records with the Secretary of State does not turn up any records showing that David Genova has a real estate license in California, even though his name was on the July 29 notice attacking one of the City Council members for speaking up about the mass evictions taking place at Creekview Condominiums.

The 60 Day Notices (eviction notices) served to the tenants does not state that the tenants would be able to move back into their apartments, or when the issues forcing them out of their housing would be resolved.

A check with the records of the Secretary of State reveals that Silver Public Relations, entity number C2938476, has been active since 2006 in California and that the agent for service of process is listed as Marice Wainer, at 270 N. Canon Drive, Beverly Hills.

According to sources, the tenants of Creekview Condominiums had a meeting with ACCE last weekend, and Councilwoman Gayle McLaughlin was at the meeting in support of the renters. 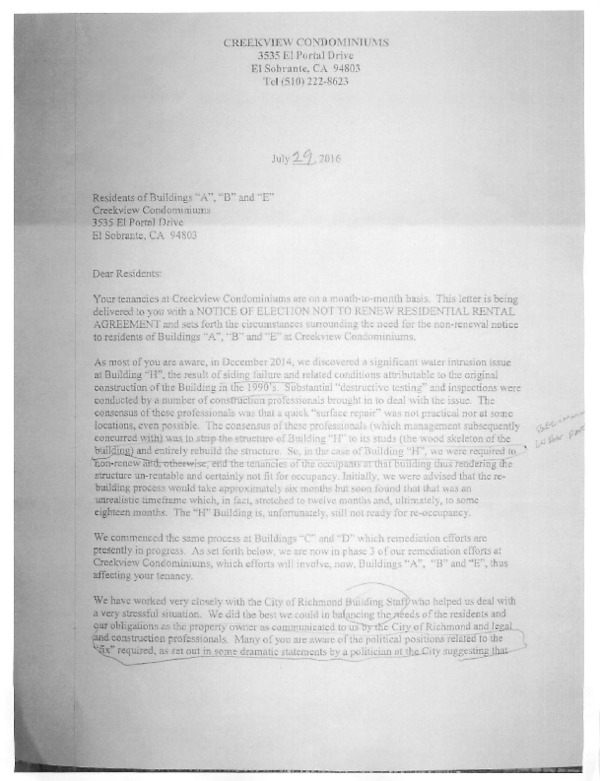 Dennis Genova has an expired real estate license according to public records...