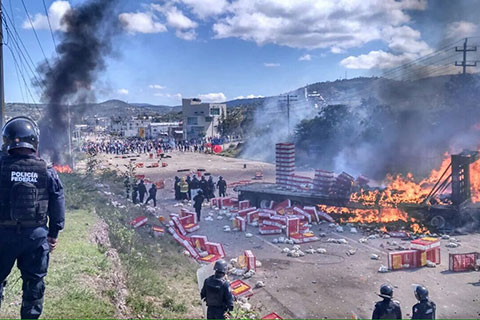 The looming federal police attack on the people and striking teachers of Oaxaca, Mexico has begun. There are reports of between six and eight demonstrators killed Sunday morning at the teachers-peoples highway blockade in Nochixtlán, northwest of the city of Oaxaca. The eight dead that the movement is confirming are Oscar Aguilar Ramírez, 25, Andrés Sanabria García, 23, Anselmo Cruz Aquino, 33, Yalit Jiménez Santiago, 28, Oscar Nicolás Santiago, Omar González Santiago, 22, Antonio Perez García, and Jesús Cadena Sánchez, 19. They were shot and killed when police opened fire with live ammunition on the blockade. At least 45 others have been hospitalized with injuries, the majority gunshot wounds, and 22 have been disappeared.

After four hours of clashes, the police broke through the blockade in Nochixtlán. The highway blockade had been in place since June 12, and was successful in preventing hundreds of federal police from entering the city of Oaxaca. Police fired tear gas from the ground and helicopters, including into a school that had been converted into a medical center.