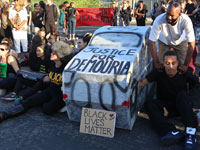 Demouria Hogg, a 30-year-old father of three, was killed by Oakland police on June 6 at the intersection of Lakeshore and Lake Park avenues in Oakland. Mr. Hogg was asleep, or unconscious, in his car at the intersections when paramedics were called, but when they arrived and saw a gun on the passenger seat, they called the police instead of helping. OPD tried to wake Mr. Hogg up for about 1.5 hours, and ultimately shot and killed him within 1 minute of "making contact" with him.

On June 12, Anti Police-Terror Project (APTP), with support of Mr. Demouria Hogg's family, organized a vigil to honor his life and mourn his senseless killing. The vigil was held in the spirit of spiritual militancy, which included pouring libations, prayer, a Danza Azteca ceremony, and artistic performances. Members of Black Youth Project, APTP, Asians for Black Lives, and Bay Area Solidarity Action Team locked themselves together and held the Lakeshore and Lake Park Avenue intersection for two hours to signify the approximate time of the siege of his vehicle by OPD that led to Mr. Hogg's killing. After the vigil, people set out to march around Lake Merritt.