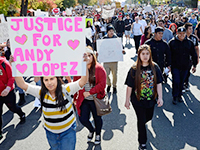 Andy Lopez was killed by Sonoma County Sheriff's deputy Erick Gelhaus on October 22. In a press release issued later that day, deputies claimed they first observed Andy walking with "what appeared to be some type of a rifle." After the scene was "secured”, deputies say they "learned" that the rifle was a replica of an assault weapon.

On October 28, the friends and family of Andy Lopez held a Rosario for the 13-year-old at the location where he was killed by a Sonoma County Sheriff's deputy on Moorland Avenue in Santa Rosa. Approximately 150 people were in attendance at the Rosario. One community member at the Rosario handed out a flier calling the killing an assassination, saying Andy was profiled, hunted, and then killed like prey by an impulsive sheriff. The flier also questions whether partner agencies are covering up the truth in the case.

On October 29, hundreds of community members in support of justice for Andy Lopez marched from Old Court House Square in Santa Rosa to the Sonoma County Sheriff's department. Before arriving at the Sheriff's department, demonstrators stopped at Santa Rosa Junior College for a short rally. A second march and rally were held on October 30.

On November 5, a “Jailhouse for Gelhaus” march met at the Old Court House Square and headed to the Sonoma County District Attorney's office to press their demand for justice. Community members declare they have but one demand: “We demand Erick Gelhaus be immediately fired, arrested, and Indicted for the Murder of Andy Lopez.” On November 9, events were held for a national day of protest for Andy.