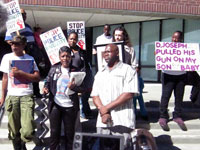 A post by Vallejo Copwatch entitled "Vallejo Police Officer who murdered Mario Romero has been identified" states that "On September 2, 2012, Mario Romero was approached and gunned down while sitting in his parked car in front of his home by a Vallejo Police Officer, identified by multiple witnesses as Officer Dustin B. Joseph (age 32)." The post additionally lists a number of prior complaints against officer Joseph reportedly found in public records.

Attorney David E. Mastagni of the Sacramento law firm Mastagni, Holstedt, Amick, Miller & Johnsen has demanded that the San Francisco Bay Area Independent Media Center (Indybay) remove the post by Vallejo Copwatch. It is unclear on whose behalf the overly broad demand was made as it requests that Indybay "remove any and all information pertaining to public safety officers employed by the City of Vallejo." The Indybay Collective has no intention of removing the post.