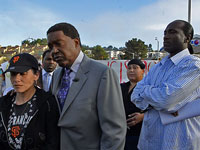 On October 30, the family of Derrick Gaines, the 15 year old who was shot and killed by South San Francisco Police Department officer Joshua Cabillo, filed a federal civil rights action against the City of South San Francisco. Family members, who are seeking $10 million in damages, hired Attorney John Burris to represent them in the wrongful death action. Burris says, "This is a clear case of racial profiling that lead to disastrous results."

The press conference was held in front of the South San Francisco Arco gas station where Gaines was killed on June 5, and Rachel Guido Red, Gaines' mother, said she hopes the civil action will lead to a change in police procedures. "These are our kids out there and there's other ways of dealing with them, other than shooting and killing them," she said.

The civil suit was additionally filed on behalf of Derrick Gaines' father, who is also named Derrick Gaines. "Every day I am having a harder time dealing with this....I know how police are, and it's killing me," he said at the press conference. "Not a day goes by I don't miss my baby...that's my only son."