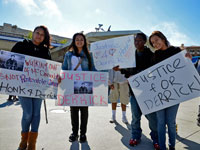 On June 12th, family members held a memorial for Derrick Gaines, a 15-year-old who was shot and killed by an officer with the South San Francisco Police Department on the evening of June 5th. Police claim that Gaines, who was walking with a friend near an Arco gas station, was engaging in "suspicious behavior".

They tried to stop him, and they say he ran and produced a gun. It was at that time a still unnamed officer shot and killed Gaines. Community members want justice for Derrick Gaines, and for the truth to come out.

Dr. Amos C. Brown, the President of the San Francisco chapter of the NAACP, spoke at the memorial, and declared, "We are going to fight this situation. We are not going to rest until a thorough investigation is done, and until these officers are brought to justice."