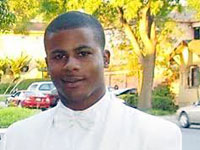 Alan Blueford Supporters Stand up for Justice at Oakland City Council Meeting
The Shooting of Alan Blueford: Searching for Answers to a Police Killing

Darwin Bond-Graham writes: "All summer long the slaying of teenager Alan Blueford by a police officer festered in the city of Oakland, a metropolis already stained by its troubled police department which for nearly ten years has been spiraling toward federal receivership due to its institutionalized culture of brutality and misconduct. It was no surprise then that the first meeting of the City Council last night, in its new session after the Summer recess, was met by over one hundred outraged protesters and the family of the young man whose death at the hands of OPD frustratingly remains a mystery, with all known facts indicating an unjustifiable murder. The internal police department investigation of Alan Blueford’s killing drags on, as do virtually any and all other official investigations, studies, and reports intended to bring about transparency and accountability within Oakland’s police department. Nothing seems to be working.

“According to the Coronor’s report, my son’s body was removed at 1:25 in the morning,” said Alan’s father, Adam Blueford, before the council, describing the haste with which the police cleaned up the scene of Alan’s demise. “How can a murder investigation be done in less than one hour?!” he asked incredulously.