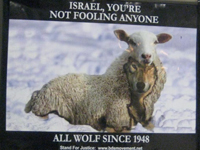 Last month, BART riders complained about anti-Palestinian ads posted in the subway system by a Los Angeles-based pro-Israeli lobby called Stand With Us. The posters depicted the eyes of a menacing-looking Arab "terrorist" wearing a keffiyeh and the message "Stop Palestinian Terrorists." BART officials responded to complaints by pulling the ads.

A new version of the ads from Stand With Us appeared in BART stations in February. The text-only posters read "Stop Palestinian Leaders From Teaching Hate & Violence." Bay Area culture jamming activists say that the new ones are just as bad, and installed replacement posters in BART stations throughout the Bay Area on February 21st.

One of the modified ads reads, "Stop Israeli Apartheid — Human Rights for All Is The Answer." Another features an image of a wolf in sheep's clothing and reads, "Israel You're Not Fooling Anyone — All Wolf Since 1948." Both replacement designs make a play on Stand With Us by featuring the words "Stand for Justice" at the bottom, and both include the address of the global Boycott, Divestment, and Sanctions website.