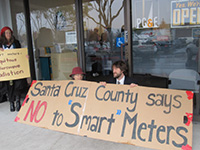 On December 14th, hundreds of PG&E customers, outraged about the health damage caused by wireless 'smart' meters, ramped up protests by testifying at county government meetings and shutting down payment centers in both Santa Cruz and Marin Counties to demand an immediate halt to the program. Protesters are also angry about PG&E's attempts to cover up the growing health scandal and recently revealed espionage carried out against their customers concerned with increasing reports of nausea, headaches, and bouts of dizziness from the meters. The protesters, backed by 22 local governments and an increasing number of scientists and medical professionals, are demanding that PG&E halt any further installation of smart meters. A statewide investigation is underway into the health impacts from the wireless radiation from the meters, which are suspected of sickening thousands throughout the state.

On December 13th, PG&E sent a number of internal emails that it had released to the California Public Utilities Commission, attempting to offer up a sanitized version of an emerging scandal, to the regional media. Despite the fact that PG&E had censored the release, there are still a number of revelations.