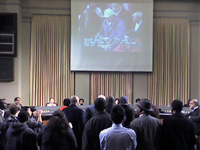 During the December 7th, 2010 Oakland City Council meeting, outraged and grieving family members, friends and members of the public demanded to be allowed to speak during "Open Forum" at the beginning of the meeting. When the council refused, supporters chanted to the front and Derrick's father spoke along with several others. Later many more spoke. The council's response was to offer to agendize the topic for a future meeting. Reportedly Derrick was shot eight times in the back by Oakland Police Department officers on Monday, November 8th. He was unarmed. Supporters emphasize he was a small business owner popular in the community.