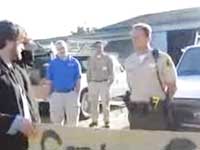 On August 30th, for the third straight morning, outraged Santa Cruz County residents gathered at the gates of Wellington Energy at 38th and Portola in Capitola, successfully blocking what they say is a forced installation of radiating 'smart' meters against the will of residents and nearly two dozen local governments throughout the Greater Bay Area.

The Santa Cruz County Sheriff showed up and asked the protesters to step aside. Once it was clear that protesters were willing to risk arrest, PG&E backed down in order to avoid any additional negative publicity that is increasingly plaguing their 'smart' meter program.

Numerous local governments, politicians, and organizations are calling for a moratorium, have enacted a ban, or are opposing Smart Meters, including the City and County of San Francisco, Santa Cruz and Marin County Board of Supervisors and the cities of Sebastopol, Berkeley, Cotati, Fairfax, Santa Cruz, Piedmont, Scotts Valley, Capitola and Watsonville.

Joshua Hart of Stop Smart Meters! says protests will continue every morning this week at 38th and Portola in Capitola, starting at 7:30am.