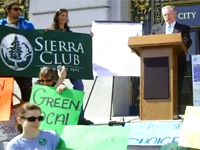 On March 23rd some San Francisco Board of Supervisors, community groups, and local residents held a press conference on the steps of City Hall to denounce the "lies and manipulations" in Pacific Gas and Electric' mailers and television commercials over Proposition 16. Supervisors also took this time to re-iterate their commitment to Clean Power SF, which is a plan adopted in 2007 that will set San Francisco on the path to using clean renewable energy from cheaper sources.

The measure would require any public entity to win two-thirds voter approval before it could start, expand or finance a publicly owned power service as an alternative to private utilities like Pacific Gas & Electric (PG&E), the state’s largest private utility — which put up $3.5 million to get the measure on the ballot and had just contributed $3 million more in the face of a letter from nine state legislators, including State Senate President pro tem Darrell Steinberg, questioning whether PG&E’s use of the initiative process violated state law.