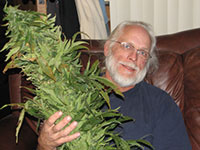 Roger Mentch, founding member of The Hemporium, a Santa Cruz County medical marijuana collective located in Felton, has been met with more resistance. Santa Clara County recently incarcerated Mentch, as well as Laura Eldridge, a disabled patient. Mentch spent five months behind bars at Elmwood Jail in Milpitas. Once bail was finally granted, it was set at the exorbitant price of $105,000, and then reduced to $55,000 after petitioning.

Mentch argues that he has been the victim of entrapment by local, state and federal law enforcement agencies. He has been out of state custody since August 2009, and his next court date is scheduled on Friday, March 19th in San Jose.

Writing about the situation, Mentch says, "It really angers me that this government has been spending OUR money, OUR TAX dollars to destroy family units, destroying the pursuit of happiness, destroy our freedoms, making vague laws and making felons out of otherwise law abiding citizens. I imagine it has cost the state somewhere near $500,000 to a million dollars prosecuting this Vietnam veteran, father of two and a very supportive individual to others.