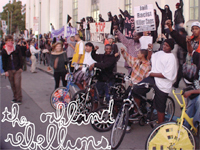 After two small print-runs for the San Francisco and New York Anarchist Book Fairs, a magazine entitled Unfinished Acts: January Rebellions is now available on Indybay in digital format. Unfinished Acts is a collective recounting and analysis of events surrounding the shooting of the unarmed, 22-year-old Oscar Grant III by BART police officers during the first hours of 2009 on the platform of the Fruitvale station. The 32-page magazine was written collectively by a group of anarchists who were and still are actively present in the rebellion.

The authors write: "We were in the streets during the spontaneous uprising in downtown Oakland on January 7th where numerous cars were torched and businesses were smashed during militant standoffs with the Oakland Police Department. We were in the many demos since, attended countless 'community meetings' at locations ranging from Black churches to art gallery spaces to anarchist co-ops, and organized support and solidarity for those who were arrested during confrontational actions. In those free moments, which barely exist, we have put together this exposé on the events so far (as the story is still unfolding) and would like to share it with you."