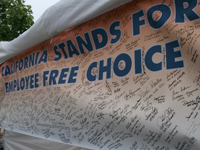 On May 6th, Bay Area workers, clergy, union members, and elected officials held a rally and 24-hour vigil outside the San Francisco Federal Building to urge Senator Dianne Feinstein to support the Employee Free Choice Act (EFCA). Feinstein recently withdrew her support for the bill, which would reform federal labor law and make it easier for workers to form unions and bargain collectively. The rally and vigil included speakers, letter writing, and visual representations that underscored the need for EFCA and for greater protections in the workplace.

Current labor law is widely seen to favor employers. Employers can fire employees over union organizing, engage in anti-union messaging, and refuse to bargain contracts, with little consequence. EFCA would remove obstacles to organizing a union, allow workers to form unions by majority sign up (or "card check"), and guarantee that workers who have formed a union are able to achieve a contract.