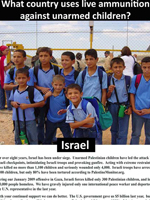 The "Israel Truth Campaign" unveiled its first bus shelter billboard on March 30th in Berkeley, California in observance of “Land Day." Land Day commemorates the events of 33 years ago, when Israeli security forces shot and killed six young Palestinian citizens of Israel and injured many. These youth were among those protesting Israel’s expropriation of Palestinian land to build new Jewish colonies and expand existing Jewish cities at the time.

In a satirical manner, the new ads make fun of the pro-Israel Blue Star PR ads found in similar placements around the Bay Area while at the same time confronting viewers with facts about the situation for Palestinians, especially children. As an example, the press release explains that the "new ad campaign features a picture of Palestinian terrorists disguised as schoolchildren" and notes that it "commemorates attacks on Israeli forces by unarmed children."