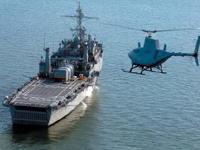 The U.S. Navy is facing criticism for its training operations on the Pacific coast. Environmental groups say some areas should be off limits to weapons testing, criticizing the militarization of the sea. The Navy wants to use nearly the entire U.S. coastline for weapons and warfare training. The North West Training Range Complex stretches more than 134 thousand nautical miles, from the U.S./Canadian Border to Northern California, into the waters just off Mendocino County. The Navy is claiming this entire area for its weapons training including under water bomb detonations and mining, and the use of aircraft, missiles and sonar. John Mosher, project manager for the North West Training Range, says the Navy has already claimed Northern California for its weapons training, but this is the first time they have actually mapped out the boundaries. Mosher says most of the training occurs off the coast of Washington. But environmental groups say the use of sonar and bombs will impact the marine life that makes Northern California special. Taryn Kiekow, an attorney for the Natural Resources Defense Council (NRDC), says sonar has long-range effects on marine life including fish.