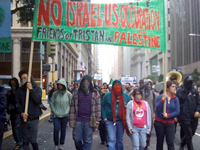 On Monday March 16th, hundreds demonstrated at of the Israeli Consulate in San Francisco to hear speakers in support of Tristan Anderson and the people of Palestine, including Tristan's partner Gabrielle Silverman, from the hospital in Israel where Tristan is being treated. About 5pm, demonstrators marched to the intersection of Market and 5th. After demonstrating there for about an hour, many in the crowd marched back to the consulate where police attacked protesters with clubs and as many as six people were arrested. Other solidarity events are being held all over the world.

Global solidarity events: In Tel Aviv a protest was held outside of the ministry of defense on March 15th. The same day there was a protest in Chicago (

Photos). On March 16th, three people were arrested at a solidarity demonstration in Miami. A demonstration was also held in New Haven, CT, on the 16th. Mazin Qumsiyeh and others spoke. On March 17th, people gathered outside of a Friends of the IDF Gala Dinner at the Waldorf Astoria Hotel in New York. A solidarity event took place in London on March 18th at the Israeli Embassy. Another is being planned for March 20th in New York City. Dozens of activists from Anarchists Against the Wall have called on police to refuse to participate in war crimes and the killing of demonstrators. United for Peace and Justice will hold a number of vigils. In London a vigil was held outside of the Israeli Embassy.