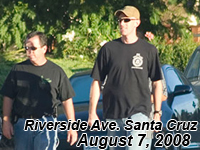 In Santa Cruz last week, at least three individuals were visited by FBI agents and compelled to give DNA samples. The agents possessed court orders for their DNA in investigation of a "violation of the Animal Enterprise Terrorism Act."

Another individual was served with a subpoena for a federal grand jury hearing. FBI Special Agent Andrew Myers found her in downtown Santa Cruz as she hung out with friends last weekend. The grand jury hearing is scheduled for October 23rd at the federal courthouse in San Francisco.

An anonymous contributor to Santa Cruz Indymedia states, "Anyone with more specific information should post here. We need to be as public about this as possible. We need to let folks facing FBI intimidation know that they have our utmost support, and send the FBI the message that we will never cooperate with their witch-hunts." Read More