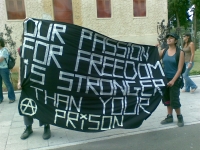 On On August 25th, Sahar Vardi was sentence to 7 days in jail for refusing to join the IDF. Vardi is the first women among a group of Israeli high school seniors who are refusing to join the occupying Israeli military. The group has published and sent a letter to Israel’s Prime Minister Ehud Olmert saying “Our refusal comes first and foremost as a protest on the separation, control, oppression and killing policy held by the state of Israel in the occupied territories, as we understand that this oppression, killing and routing of hatred will never lead us to peace, and they are all contradictory to the basic values a society that pretends to be democratic should have.”

Vardi is the third conscientious objector among the teenaged group to be sentenced to jail. In Israel, military service is mandatory for every Jewish person who is 18 years old. The act of refusing to take part in the occupying and racist acts of the Israeli military by Israeli high school teenagers has been taking place for numerous years. The first person among this year freshmen to be arrested for refusing to serve is Udi Nir. Nir made a brief statement before going to jail saying “I cannot take part in the activities of an occupying army, which constantly violates human rights. As an Israeli citizen and as an adolescent liable for enlistment I feel a sense of extensive responsibility for the cycle of violence and for all the choices I am making. It is out of this sense of responsibility that I refuse to enter the cycle of bloodshed and to add fuel to the fire of hatred raging here. I refuse to enlist into an occupying army so that I will not lend my own hand to the occupation and to acts that contradict my most basic values: human rights, democracy and the personal responsibility each and every human being bears towards fellow human beings.”

On the day of the sentence, many supporters of Vardi gathered at the induction military base to support Varid’s decision. The demonstrators held signs stating “release the conscientious objectors” and “who is the real criminal?” and yelled slogans such as “we don’t shoot, we refuse to be murderers”. They were confronted by a group of pro-military Israelis who screamed “if you don’t like this country, why don’t you move to Switzerland?” Read More

The Shministim Movement The Ordeal of Sahar Vardi, Refusenik | Refusenik Omri Evron: "Why I can't become a soldier in the IDF" | Refusniks Electronic Intifada