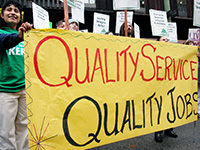 On the heels of University of California's ongoing executive pay scandals, UC's Administration is once again being denounced for misplaced priorities. For ten months, 20,000 UC medical and service workers have been trying to protect quality patient care and CA communities, reporting that lack of competitive wages is impacting the University's ability to retain its best staff. After ten months of negotiating for equal pay for equal work, they have reached impasse, and the workers announced they will take a strike vote, running from May 17th-May 22nd. A press conference will be held on May 23rd to announce the results.

According to CA State-appointed neutral Factfinder Carol Vendrillo, who independently evaluated the viability of a service workers' labor agreement, "U.C. has demonstrated the ability to increase compensation when it fits with certain priorities without any demonstrable link to a state funding source... It is time for UC to take a broader view of its priorities by honoring the important contribution that service workers make to the U.C. community and compensating them with wages that are in line with the competitive market rate." Read More