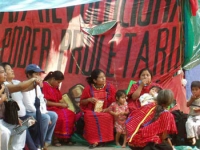 On April 7, two indigenous Triqui women who worked at the community radio station La Voz que Rompe el Silencio (The Voice that Breaks the Silence), in the autonomous municipality of San Juan Copala (Mixteca region), were shot and murdered while on their way to Oaxaca City to participate in the State Forum for the Defense of the Rights of the Peoples of Oaxaca. Three other people were injured.

According to prelimary reports, the women had left the station, which is part of the Network of Indigenous Community Radio Stations of the Southeast (Red de Radios Comunitarias Indígenas del Sureste), around 1 p.m. They were traveling in a truck on their way to Oaxaca City, but were ambushed on the outskirts of the community of Llano Juarez.

The two community radio activists were supposed to coordinate the working group for Community and Alternative Communication: Community Radio, Video, Press, and Internet, at the State Forum for the Defense of the Rights of the People of Oaxaca, which was to begin on April 9 in the auditorium of the teachers union in Oaxaca. The Center for Community Support Working Together (CACTUS) released a statement denouncing the murders and demanding that the state authorities investigate and punish those responsible for the crime.

The state attorney general said that twenty 7.62 caliber bullet shells were found at the site of the murders, along with other arms including an AK-47. International supporters have been asked to contact their local embassies and consulates and organize demonstrations condemning the paramilitary repression of indigenous women and community media projects.