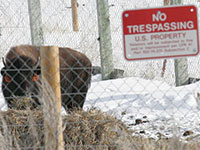 GARDINER, MONTANA - Yellowstone National Park officials captured 53 wild American bison on February 8th inside the Stephens Creek bison trap located within Yellowstone National Park's borders. The captured bison are members of the last wild, genetically intact population existing in the United States, and number fewer than 4,600. Most, if not all, will be sent to slaughter without being tested for brucellosis antibodies.

The bison were captured for following their natural migratory instincts and walking onto habitat that is privately owned by the Church Universal & Triumphant (CUT). CUT land hosts fewer than 250 head of cattle. Wild bison are also refused access to publicly owned Gallatin National Forest lands adjacent to Yellowstone National Park and CUT property. In the winter months, grasslands in the Park are obscured by deep snow and bison and other wild ungulates venture to lower-elevation habitat where they find critical forage necessary for survival.

Read More and Listen to the Interview

see also: Hey Park Service! Don't bulldoze Yellowstone buffalo just so I can stay on my side of the double yellow line || Previous Coverage