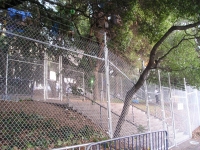 November 20th: UC Berkeley has completed the construction of a second barbed-wire fence around the Memorial Oak Grove, costing $80,000, enclosing approximately ten tree-sitters inside, and can fine or arrest anyone acting "in concert" with the tree-sitters. Police presence and harassment has increased since the completion of the fence. UCPD officers are randomly threatening supporters for simply being on site. They have provoked ground-supporters by stealing personal property. Zachary Running Wolf, Native American elder and one of the original tree-sitters, was arrested twice this week by UCPD. Over the last week UCPD has been arresting one person per day on average. Harassment of the tree-sitters has increased as well. Intense lights powered by noisy gas-generators are pointed upwards into the trees at the sitters every night, making sleep difficult. It appears that UC Berkeley has halted plans to forcefully remove the tree-sitters and UC is hoping a "starve-out" strategy will force them down by isolating them from ground support, depriving them of sleep, food, and water. On November 16th, UCB wrote a letter to Judge Barbara Miller asking her to amend her previous ruling prohibiting any cutting of the trees. Oak supporters are calling for an 11am Thanksgiving Day gathering at the Grove. A group of mothers will bring holiday pies to feed the sitters, and a “Thanksgiving Turkey” will walk up to the grove with food for the tree defenders as well.

Previous Coverage Of The Berkeley Oaks