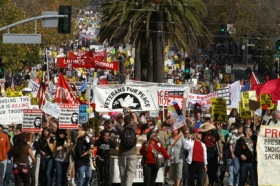 On Saturday, October 27th, regional and local "Fall Out Against the War" demonstrations against the war in Iraq were held all over the United States. The protests marked five years since Congress voted to authorize the use of U.S. force in Iraq.
US Indymedia Coverage | Reports From ANSWER | WSWS Reports 1 | 2 | Minneapolis Indymedia Coverage |

Chicago Indymedia Photos | Seattle Indymedia Photos In San Francisco, tens of thousands gathered at 11:00am at Civic Center Park for a rally and march. As the march began, protesters filled up Market Street for several blocks. At the head of the march was a band of Native American drummers. As the front of the march reached Octavia St., thousands of protesters fell to the pavement in a symbolic "die-in". For several minutes, the demonstrators lay on the pavement, representing over 1 million Iraqis who have died since the US invaded their country. The march ended at Dolores Park, where demonstrators listened to speakers, including Cindy Sheehan and American Indian Movement leader Dennis Banks.