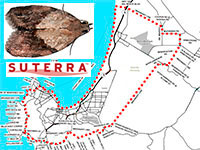 The California Department of Food and Agriculture and the United States Department of Food and Agriculture released an official notice to Seaside which states, "Due to an infestation of Light Brown Apple Moth (LBAM), aerial applications of CheckMate®OLR-F (a pheromone mating disruptor) are necessary. Your area is scheduled for treatment starting at 8:00 p.m. on September 5, 6 and 7 2007, continuing into the early hours of the following morning."

Michelle Neubert comments, "This is a mandatory spraying put in place 9 months ago with a $15 million contract, but we only are notified August 15. There is no public imput but you can ask government officials questions only on two evenings Aug. 20 and Aug 21. I can't find on the internet any other communities with 10s of thousands of residents who were aerially sprayed. We are the first in California. Are we the first in the US? This is scary." Read More

A.G. Kawamura, Secretary of the California Department of Food and Agriculture writes, "I have determined that aerial application of the moth pheromone, Checkmate OLR-F, will begin in Monterey County on Sunday, September 9, at 8 p.m., weather permitting. The operation that night will cover just part of the eradication area. To complete the initial application throughout the rest of the area, additional plane flights are scheduled to occur on September 10 and September 11th."

Sharon Christensen comments, "OLR-F manufacturer (Suterra) label warns of potential harm to humans, including eye and skin irritation. The label states handlers should avoid inhaling or touching. If one is to be subjected to overhead spray, one should wear chemically resistant headgear. CDFA did not provide this warning with its notification.
Kawamura claims the application will be so diluted, he and CDFA toxicologists do not EXPECT any harm to humans. But if it is so diluted, isn't it unlikely to be ineffective for moth eradication. What about the cumulative affect on humans? Spraying is planned for multiple times.
Monterey Herald quotes Kawamura Sept 10: "...We're going to do our best to help this Peninsula try to stay healthy. The most important point has got to be that THE ONSLAUGHT OF INVASIVE SPECIES IS THE BIGGER ISSUE." i.e. Kawamura (with governor's approval) values agricultural interests over human health.
Kawamura comes from a family of strawberry growers. Doesn't this fact pose a significant conflict of interest for him to be given the power to decide an issue that may risk human health?" Read More