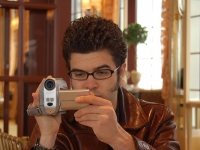 Anti-G8 Fallout: Learning from Past Actions in San Francisco
An Interview with Josh Wolf

Fault Lines interviewed Josh Wolf and Gabe Meyers, the two people targeted by the federal and local authorities after the July 8, 2005 Anarchist Action Anti-G8 demonstration in San Francisco. Anti-capitalist protests and demonstrations against the G8, WTO, and other institutions that represent neo-colonial domination and corporate globalization have always been met with more aggression and hostility than normal marches for peace. Granted, these demonstrators are often much more militant. With a police officer injured and a police car damaged, the authorities felt a need to subpoena and prosecute. Read More
Related Categories: San Francisco | Fault Lines