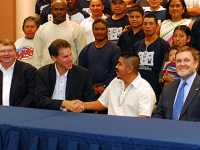 On Verge of Major Protest, CIW Reaches Landmark Accord with McDonald's
McDonald's Meets the Demands of the CIW

Campaign surges forward with Burger King in its sights

On April 9th at The Carter Center in Atlanta, the Coalition of Immokalee Workers (CIW) and McDonald's announced a landmark agreement to work together to improve the wages and working conditions of the farmworkers who pick Florida tomatoes. After two years of escalating pressure by the CIW and its allies, McDonald's has agreed to all of the CIW's demands and more.

"Two years ago, our agreement with Yum Brands marked the first step toward a distant dream of ensuring human rights for workers in Florida’s fields," said Lucas Benitez of the CIW. "Today, with McDonald’s, we have taken another major step toward a world where we as farmworkers can enjoy a fair wage and humane working conditions in exchange for the hard and essential work we do every day."

Building off this tremendous momentum, the Campaign for Fair Food now surges ahead at full speed – this time towards Miami-based Burger King. Two months ago, the world's #2 burger chain publicly rebuffed the CIW by rejecting a proposed partnership, smugly offering farmworkers jobs at Burger King restaurants instead of real rights and fair wages. Now the tables have turned.

This weekend's mobilization in Chicago – where Tom Morello and Zack de la Rocha of Rage Against the Machine have just confirmed they will perform together – takes on new significance. Join the CIW, SFA and thousands of allies in Chicago to take the fight for fair food to the next level.