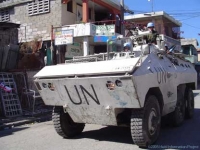 In the early morning of Friday, December 22nd, starting at approximately 3 a.m., 400 Brazilian-led UN occupation troops in armored vehicles carried out a massive assault on the people of Cite Soleil, laying siege yet again to the impoverished community. Eyewitness reports said a wave of indiscriminate gunfire from heavy weapons began about 5 a.m. and continued for much of the day Friday — an operation on the scale of the July 6, 2005 UN massacre in Cite Soleil. Detonations could be heard for miles, AHP reported. Initial press accounts reported at least 40 casualties, all civilians. According to community testimony, UN forces flew overhead in helicopters and fired down into houses while other troops attacked from the ground with Armored Personnel Carriers (APCs). People were killed in their homes. UN troops from Brazil, Chile, Uruguay and Bolivia took part in the all-day siege, backed by Haitian police. UN soldiers once again targeted the Bois Neuf and Drouillard districts of Cite Soleil — scene of the July 6th massacre. Read More | Democracy Now: UN Accused of Killing Dozens In Attack on Port Au Prince Neighborhood | Poor Residents of Capital Describe a State of Siege | Haiti Action