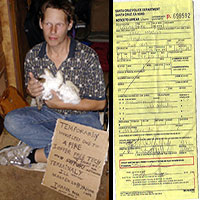 Tim Rumford writes: It is a sad day in Santa Cruz when a terminally ill person is forced to the streets, only to be told how useless and unwanted he is - harassed and forced to call the police for help -- only to receive the opposite.

Shane has Aids, is truly very ill, lost his home after a fire, and does free tech work for people who are homeless or simply broke. This day he needed propane for warmth. Shane was there for about an hour when Manthri Srinath, owner of LuLu Carpenters, came out and ordered him off the mall. He then got right in Shane’s face and began a rant of threats and abusive language. Saying to Shane, “We don’t like your kind here. You are a freeloader. I can ruin your whole life!” Shane asked who the man was, noting he did not have a badge. Read Shane's full account of the incident