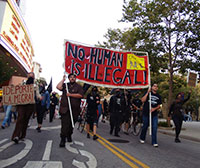 According to media reports, 107 people from Santa Cruz, Watsonville and Hollister have been arrested by U.S. Immigration and Customs Enforcement (ICE) officers in a sweep over September 7th and 8th. Of the immigrants, mostly from Mexico, but also from El Salvador, Guatemala and India, 44 have already been deported without prior access to lawyers. The rest are currently being held in custody at an undisclosed location. Many of those arrested in "Operation Return to Sender" have lived in the United States for the majority of their lives, and have homes and US-born children.

Amelia McDonald comments: The INS continues its harassment of our local Central Coast Community. Reports from fellow comrades have placed INS or ICE officials outside of Cost-co on Saturday and outside of the Flea Market on Sunday. These immigration officials were clearly seen using racial profiling to apprehend and question specific members of our community. This must stop.

see also: A letter condemning the Sentinel lack of coverage || Solidarity with Watsonville