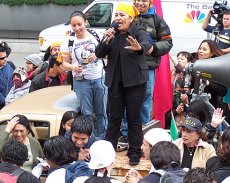 Over 50 hunger strikers and organizations held a seven-day protest in front of the Federal Building in San Francisco from March 21st through March 27th to protest against anti-immigrant laws. The protesters spoke out against Senator Arlen Specter’s bill (HR4437) that designates all undocumented immigrants as aggravated felons, allows for the indefinite detention of non-citizens, and criminalizes day-labor centers, churches, health clinics and all others who serve, help or work with undocumented immigrants. There were candlelight vigils at the Federal Building every day and a march on Monday March 27th.

March 25th was a National Day of Solidarity, with a press event at the Federal Building connecting the Bay Area to events that have been happening across the country. Over one million people filled the streets of Los Angeles demanding civil rights for immigrants, in what may be the largest demonstration in California history.

On March 27th there were student walkouts state wide.

San Francisco Declares Opposition to Anti-Immigrant Bill | We Didn't Cross the Border, the Border Crossed Us | Fear -- the Core of Current Immigration Debate | Old Civil Rights Groups Missing-in-Action As Immigrants Hit the Streets | Hispanic Media at the Forefront of Immigration March | Si Se Puede! Illegal Immigrants Speak Up - And America Should Listen | Up to 2 Million Take to the Streets of L.A. | Immigrant Rights Protests Spread -- New Chapter in Civil Rights Movement | More than a million march in Los Angeles, other US cities in defense of immigrant rights | UFPJ: Emergency Action for Immigrant Rights