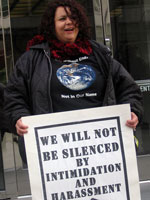 A federal grand jury in San Francisco demanded the re-appearance of several alleged animal rights activists on Wednesday, January 25th. These people face jail time for exercising their right to remain silent before what supporters call a "secret government inquisition." They say that a strong showing of opposition to FBI witch hunts is crucial to the survival of the activist community. About 50 supporters demonstrated at 9:00am in front of the San Francisco Federal Building at 450 Golden Gate (between Polk and Larkin).

In a report from the June 22nd, 2005 grand jury hearing, Indybay reporter Kelah Bott stated that "Many activists (and non-activist citizens) are opposed to the Grand Jury system as a violation of one’s constitutional rights. Once in the Grand Jury room, those forced to testify have no right to an attorney. The power of the prosecutor goes unchecked and there is no limit to the scope of the questions they may ask. The Grand Jury is used a tool of the prosecution to gather information on social justice movements and to drive divisions between activists."