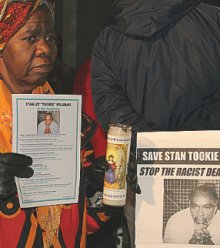 Stanley Tookie Williams III was executed early this morning by lethal injection administered by the state of California. Williams, who was just weeks from his 52nd birthday, is said to have been a co-founder of the Crips gang in Los Angeles. In 1981, he was convicted of the 1979 murders of four people in the Los Angeles area. After 6.5 years in solitary confinement on Death Row at San Quentin, he renounced his past gang affiliation. He wrote several books and started programs to discourage youth from joining gangs. A film starring Jamie Foxx entitled "Redemption: The Stan Tookie Williams Story," was made to tell his story. Williams never admitted to having committed the murders for which he was convicted. This was one reason that Governor Arnold Schwarzenegger cited for denying him clemency.

Thousands of protesters held a vigil in front of San Quentin as Williams was killed.
Photos:

Supporters of Williams tried to submit issues to various legal bodies in hopes of being granted a stay of execution. If a 60-day stay had been granted, it would have given time for courts to examine the legal issues that are outstanding in the case. It would have also given California's legislative bodies a chance to vote on AB 1121, the California Moratorium on Executions Act. The death warrant for Stanley Tookie Williams was signed in October. His execution date was set for December, while the two other men whose warrants were signed the same day received execution dates in January and February of 2006. Read more In the days before his death, a new witness appeared: Gordon Von Ellerman has reported that he had knowledge that Oglesby, a witness who testified against Williams, had studied ways to help frame Williams. Interviews: Democracy Now | Flashpoints | Wake Up Call 12/12/05 | What I would do with the rest of my life
People who met with Stanley Tookie Williams: Rev. Jesse Jackson | Jamie Foxx | Snoop Dogg