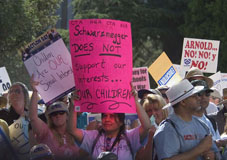 ABC has united, it says, "to protect our state, while the governor continues to raise more special interest contributions than any governor in state history. We don't need to waste $70 million on a special election that no one wants with initiatives that no one supports. We need real reforms that will move California forward, rather than the governor's broken promises and short-sighted proposals that will further damage California public schools. Help send a message to the governor that the 'special interests' he keeps referring to are thousands of ordinary citizens and workers concerned about public school children, hospital patients, and overall public safety."

More About the 5/25 Sacramento Rally, which begins with entertainment at 3:30pm