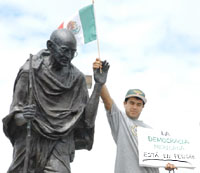 Over one hundred people braved uncertain weather in San Francisco on Sunday, April 24th in solidarity with the worldwide demonstrations in support of Mexico City's embattled mayor, Andrés Manuel López Obrador. Now that he has been stripped of his immunity, Lopez Obrador has been facing arrest over a minor four-year-old infraction. Two weeks ago, the Mexican federal Congress voted to impeach him from his job as mayor. Once an arrest warrant is issued, he could lose his political rights and be barred from running for the presidency. He has been comfortably leading opinion polls for next year's elections to replace Mexican President Vicente Fox, who cannot run again.

The crowd included students from UC Davis, UC Berkeley and Stanford students, as well as local organizations such as Centro Azteca de Información, AFL/CIO local 790, families of Mexican origin and diverse US citizens. Signs carried by protesters included "Mexican democracy is an endangered species," "Mexico: Democracy in Danger," and "Fox, the world is watching." They rallied along the piers near Fisherman's Wharf. The crowd held an emotional visit to a statue of Mohatma Gandhi, which emphasized the peaceful nature of the protests that were carried out in Mexico City, San Francisco and cities such as Sacramento, Barcelona, Tolouse, Boston, and Sydney. More than a million people protested in Mexico City alone. The San Francisco protest ended in Aquatic Park, where pictures were taken with the Golden Gate bridge as a backdrop, and the different groups proclaimed an alliance to increase pressure on the Mexican government throughout the state of California.

Photos and Report | More about the Mayor from Democracy Now! | Report/Analysis of 4/24 from La Jornada | More Coverage on Chiapas Indymedia