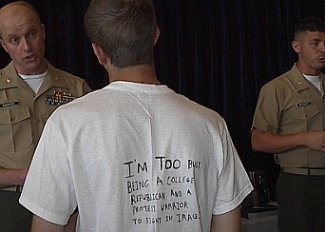 Recently, the Associated Students at the University of California (ASUC) passed a resolution that argued that military recruiters (who refuse to recruit gays and lesbians) violate the University of California's anti-discrimination policy and therefore should not be allowed access to ASUC facilities (SB 107). Still, military recruiters showed up at the April 21st Career Fair in the MLK student union. Protesters gathered at 10:30am and rallied outside before going in to the fair and lining up at the military tables pretending interest or saying they were gay but wanted to join. A group of Berkeley Republicans held a counterprotest.
Photos: 1 | 2 | 3

Counter Recruitment has become a national issue. Between these efforts and widespread anger about the war, all branches of the United States Military have seen drastic drops in their recruitment rates. In February, the Army missed its recruiting goal for the first time in nearly five years, and it missed its March goal by 32 percent. The Army Reserve is 10 percent behind their year-to-date recruiting target and the National Guard is 26 percent short, while the need for soldiers is on the rise. Berkeley Stop the War Coalition has been working to bring the Counter Recruitment movement to UC Berkeley's campus.
Read More | Past Counter-Recruitment Coverage: 1 | 2 | 3 | 4 | 5