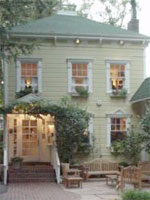 The Lark Creek Inn Restaurant in Larkspur has not returned activists calls for a meeting to discuss the end of the sale of foie gras at their restaurant with local activists. Activists have hand delivered letters, packages of facts and video tape footage of the cruel process of producing foie gras to the restaurant. The Marin Peace and Justice Animal Rights Committee is now officially calling for a boycott of The Lark Creek Inn restaurant until they stop buying and selling foie gras. Foie Gras is a product of ducks being force fed nearly four pounds of corn mush a day through metal pipes shoved down the birds’ throats until their livers explode and they die. The three daily force-feedings frequently choke, injure or kill the birds by gouging open their throats with the metal pipe. By the end of the force-feeding process, ducks are physically debilitated with livers five to ten times normal size and many are unable to stand or walk. Read more

Other Recent Coverage of Fight Against Foie Gras