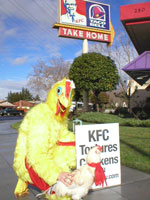 Over 750,000,000 chickens raised for KFC every year endure egregious and unnecessary abuses. Undercover investigators and former employees have documented numerous such abuses in KFC supplier slaughterhouses and other facilities. KFC has so far refused to implement comprehensive guidelines developed by its own animal welfare panelists to prevent these and other abuses. In response, organizations such as Bay Area Vegetarians and others throughout the United States and abroad are supporting People for the Ethical Treatment of Animals' campaign against KFC's inhumane practices and calling for welfare reforms. Locally, regular monthly demonstrations have occurred in front of KFCs in San Francisco, San Jose, Pacifica, and Santa Cruz, with plans to expand the actions to Santa Clara, Sunnyvale, Cupertino and more. Reports and Photos: San Jose | Santa Cruz