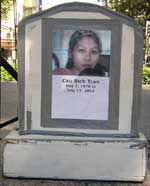 Cau Thi Bich Tran was killed by a San Jose police officer on July 13, 2003. The police had come to her neighborhood because they had received reports of an unsupervised child in the street. According to one report, she herself had also called 911 because one of her children was locked in a room in her home. Within moments of the arrival of the police, Tran had been fatally shot in the chest. She had been gesturing with a vegetable peeler, called a dao bao, that is commonly used in Asian cooking, towards the locked bedroom door. Officer Chad Marshall thought that Tran was holding the dao bao as a weapon, did not identify himself or ask her to put down the dao bao, and fatally shot her. She was speaking Vietnamese and Marshall did not know that language. Tran's partner was in the same room and witnessed the killing, while her children screamed in the next room. She was 4'9" tall and weighed less than 100 pounds. San Jose has one of the largest Vietnamese communities in the United States, but no Vietnamese-speaking officers were on the scene at Cau Bich Tran's home. Police and media reports after the death focused on Ms. Tran's history of mental illness, without mentioning that it might seem unusual for an officer to fire within seconds of arrival on a scene.

Community organizations and concerned citizens have joined together to form the Coalition for Justice and Accountability. The goal of the Coalition is "to prevent this type of killing in the future, to hold those responsible for the killing accountable, and to ensure that the investigation into Cau's death will be fair and impartial." The Asian Law Alliance in San Jose has been one of the most active members in the Coalition. A 100 Day Memorial Vigilwas held on Oct. 20, 2003 at San Jose City Hall. Cau Bich Tran's story was a major part of the October 22nd National Day of Protest in 2003. National Report. Her family filed a wrongful death suit against Marshall and the city in November after a grand jury cleared the officer of criminal wrongdoing. The grand jury had been the first public hearing of its type in San Jose since 1996. A memorial to commemorate the one-year anniversary of her death and the 5-month anniversary of the death of Rudy Cardenas was held on Saturday, July 17th, 2004.