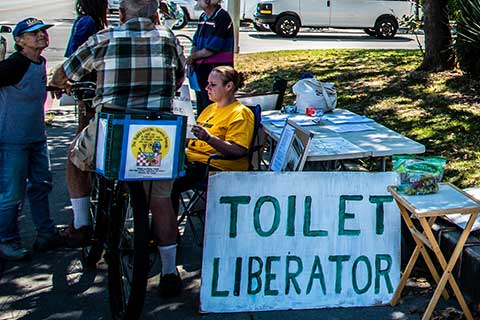 Demonstrators staged sit-ins on September 3 in the men's and women's restrooms at Louden Nelson Center in Santa Cruz, effectively keeping the facilities open to the public for an extended period of time. Once open to all, the Louden Nelson restrooms have been closed to the public since 2018, which staff claims is due to complaints of vandalism and drug use. To enter the restrooms, a person must either be a patron or customer of the center, and punch in an electronic pass-code provided by the attendant at the front counter. Those at the demonstration were particularly concerned about the effects the restroom closures have had on homeless residents in the area, who often congregate in the park adjacent to the Louden Nelson Center where there are no other services.

Demonstrators were able to gain entry to the restrooms during the senior lunch service, when the doors are sometimes left open. They expected that attendants would arrive and lock the facilities back up after the luncheon was over, but that did not occur, and the public was allowed to enter the restrooms freely while demonstrators sat quietly by.

Robert Norse writes: When the San Lorenzo Winter Campground was shut down [In 2018] without providing adequate alternate sleeping facilities for unhoused residents, those without shelter began to sleep in Laurel Park, adjacent to the Louden Nelson Center. Use of the bathrooms increased. Though masking the discriminatory policy as being concerned with "illegal" behavior (such as sleeping near the Center, using the washrooms to shave and wash, and "drug use"), the wholesale exclusion was clearly intended at unhoused people. It also significantly impacts the entire community. The nearest bathrooms are blocks away (with the exception of the police department, which is usually not available, according to a beat officer).

Time to Get Off the Pot: Louden Nelson--Reopen Your Bathrooms to All the Public |

Pee & Poo Protest: Reopen Essential Bathrooms for the Public and the Poor |