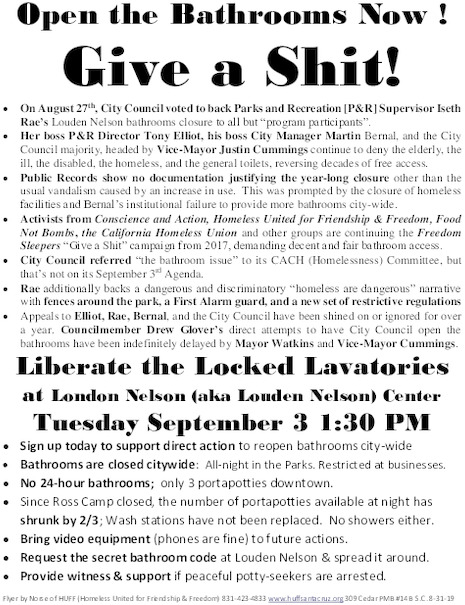 Download PDF (633.7KB)
AGENDA MANIPULATIONS,PUSHBACK BY THE PUBLIC, SILENCE FROM THE PROGRESSIVES
Mayor Watkins whittled down a long line of speakers at Oral Communications at 7 PM, a number in support of Councilmembers Krohn and Glover. Some attacked the Glover-Krohn recall, with charges the paid signature gatherers were involved. Others denounced the public smear of Glover and Krohn embodied in the months-long "investigation". Another singled out City Manager Bernal's latest memo of last week instructing staff not to communicate with Glover except through him and the staff heads.

Krohn attempted earlier in the day to move the Council Meeting Calendar back to its position near the end of the agenda, from which Watkins had moved it in June. His motion failed 3-4.

Neither he, Krohn, nor Brown attempted to require the Mayor to bring back survival encampments, the selective enforcement against homeless people of infractions, a public process for setting the agenda, or other matters raised months ago by Glover.

Any of these items could have been proposed for forced inclusion on the next agenda by motion and majority vote at the Council Meeting Calendar segment. None were even proposed. Even if these motions had been proposed and failed, the outcome would have clarified for the community, just who was blocking the Progressive legislation (i.e. Justin Cummings, joining the "old guard" minority of Watkins, Myers, and Mathews).

GLOVER CAVING GENERALLY ON PROCESS
Since it's been made clear that Mayor generally is not responding to Glover and Krohn's requests to agenda-ize items, that process has to be forced through a 4-3 vote at the Council Meeting Calendar segment. Glover has responded he won't do that unless the Mayor has previously refused to put the item on after the standard two-weeks-in-advance request, the "proper procedure" according to Glover. He also wanted assurance that there would be four votes for any such attempt to force the Mayor to provide proper agendaizing.

I saw this same failure of nerve with former Councilmember Micah Posner some years ago. He voted repeatedly for wretched anti-homeless measures, praised reactionary staff behavior, and insisted he needed to take "baby steps" rather than speak out and vote clearly as a matter of principle. The same kind of justification is now coming out of Glover's mouth.

RESTORING SHARPS CONTAINERS AT LOUDEN NELSON?
I asked Glover the next day by phone at a HUFF meeting to use his "proper procedure" to request that sharps containers be restored to public bathrooms. That would involve a simple written request to Watkins to put the item on the first agenda in September.

Watkins requires such requests to be made two weeks before the next City Council meeting. Glover declined to propose the matter to Watkins even using HER procedure. Instead he said he would require three Council members to sign staff reports two weeks in advance. If she then failed to put it on the agenda, Glover suggested he'd need to be assured of a total of 4 votes before moving to require Watkins to agenda-ize by bringing the issue up at City Council publicly. He also sounded annoyed that I would make such a request. .

Such containers were available at Louden Nelson before the Pamela Comstock/Hillary Bryant/Lynn Robinson Drug War Hysteria descended on City Council driving needle exchange out of the City. (See "Needle Hysteria: The Shut Down of Needle Exchange by Right-Wing Extremists " at https://www.indybay.org/newsitems/2013/02/21/18732515.php.)

PLAYING NICE WITH THE NASTIES
I've concluded that that in spite of earlier denials, Glover may have significantly pulled in his horns from the recall, the bogus publicity around the investigation, and the latest City Manager's gagging-the-staff caper. Others claim he is taking a more temperate approach, his direct attempt to propose immediate solutions having been tied up by Cumming's refusal to go along.

Still another possibility is the fact that Cummings did, in at least two actions, rejoin the Progressive coalition by (1) successfully moving to have City Hall bathrooms reopened for the moment; and (2) asking for a more moderate and humane policy from Bathroom Boss Iseth Rae at Louden Nelson.

Note this, though: (1) Shadow mayor Cynthia Mathews immediately moved to limit the City Hall opening to a month.--and both Cummings and Glover accepted the amendment.
(2) Louden Nelson Supervisor Iseth Rae had the final word of the evening, essentially declaring she'd direct her staff to maintain the current "no exceptions" policy keeping the bathrooms locked to all but authorized patrons or customers.

No Councilmember objected to this status-quo-set-in-ice response. Afterwards, Glover beamed that we'd gotten "victories' and that he "respected" Rae's "security for the kids" concerns. Yet no evidence other than sensational anecdotes was presented of any danger to the minors at the Youth Center there.

The absurd and dangerous policy of treating all those not in "scheduled programs" or buying merchandise because of an alleged "drug danger" is reminiscent of the concerns that have stripped away civil rights and escalated militaristic police powers here. This phony fascistic narrative restricts the entire community but particularly impacts the homeless, the disabled, the sick, the elderly, and those using adjacent Laurel Park.

Former Counclmember Micah Posner, who made a habit of praising the staff as they proposed measure after measure criminalizing homeless people under the pretext of "criminal behavior" declared to me with a smile that we'd won "victories" These victories included (1) the temporary City Hall bathroom opening, (2) a requirement that future park facility closings be agenda-ized within 3 weeks AFTER they were done, and (3) the City's token CACH "look into" the bathroom situation at Louden Nelson and elsewhere.

CACH is an acronym for the Community Advisory Committee on Homelessness] Committee. This is the fiddle-a-homeless-tune-while-the-police-run-homeless-people-around-the-City group created by City Council in June, composed largely of non-homeless folks.

CATCH THE CACH: ANOTHER YEAR OF TALK AHEAD
It was done instead of actually ACTING on substantive homeless concerns. These included such things as (1) selective, injurious, and unconstitutional police seizures of homeless property and bullying "move along" actions, (2) dusk-to-dawn parking areas, (3) requiring police to stop using the 72-hour law to harass, (4) creating shower and laundry access, and (5) creating safety encampments.

Or at least not destroying existing survival encampments like Ross Camp until such facilities were in place. All of which were proposed by Glover at the beginning of the year, and either buried by Watkins with the collusion of Cummings or treacherously reversed.

This is similar to the fate of just-eviction protections and rent control--in a renter majority city that voted to support abolishing the Costa-Hawkins law (though under massive landlord financial pressure, defeated Measure M)--also abandoned by Cummings.

Instead a proposed a toothless law gathering limited landlord statistics (but only if the landlords chose to give them) has been offered to kick the issue down the road again, while the poor and working people of town get driven out.

SHADES OF TWENTY YEARS AGO
This whole procedure is similar to a tactic used by a sell-out majority at City Council back in 1999 when they abandoned real reform of the anti-homeless Sleeping Ban and instead set up the Homeless Issues Task Force. The group made a good report, which was merrily ignored by Krohn's Council (he was on it back then, as well). The report can be found at http://sccounty01.co.santa-cruz.ca.us/bds/Govstream/BDSvData/non_legacy/agendas/2000/20000502/PDF/020.pdf .

It's action not further discussion that's required. And even that is further delayed. The CACH agenda for Tuesday's 6 PM meeting at the (where else?!) Louden Nelson Center makes no mention of the bathroom issue forwarded to them as priority by Cummings & Company. See http://www.cityofsantacruz.com/government/city-council-subcommittees/community-advisory-committee-on-homelessness-cach .

BATHROOMS NOT BUSHES !
Another round of protest will be coming up tomorrow (Tuesday 9-3) at 1:30 PM at Louden Nelson, a few hours before the CACH sit down (6-8 PM) to ponder the difficulties of toilet training the staff there.

With another City Council meeting coming up September 24th, activists will also be meeting on Wednesday 9-4 at the Sub Rosa Cafe at 11 AM to plot out new ways to change City Council's dirty diapers. Suggestions for a "Don't Get Pissed at City Council; Bring Your Piss to City Council"-- rejected as too stinky in the past--are up for discussion.


http://huffsantacruz.org
Add Your Comments
LATEST COMMENTS ABOUT THIS ARTICLE
Listed below are the latest comments about this post.
These comments are submitted anonymously by website visitors.