Add an Event
Newswire
Calendar
Features
Home
Donate
From the Open-Publishing Calendar
From the Open-Publishing Newswire
Indybay Feature
Publish to Newswire
Add an Event
Related Categories: Santa Cruz Indymedia | Health, Housing & Public Services
Demonstrators Keep the Restrooms Open at Louden Nelson Center
by Alex Darocy (alex [at] alexdarocy.com)
Tuesday Sep 3rd, 2019 7:20 PM
Demonstrators staged sit-ins today in the men's and women's restrooms at Louden Nelson Center in Santa Cruz, effectively keeping the facilities open to the public for an extended period of time. Once open to all, the Louden Nelson restrooms have been closed to the public since 2018, which staff claims is due to complaints of vandalism and drug use. To enter the restrooms, a person must either be a patron or customer of the center, and punch in an electronic pass-code provided by the attendant at the front counter. Those at the demonstration were particularly concerned about the effects the restroom closures have had on homeless residents in the area, who often congregate in the park adjacent to the Louden Nelson Center where there are no other services. [Top photo: During the demonstration today, Rabbi Philip Posner occupies the men's restroom at Louden Nelson Center in order to keep it open to the public. Scroll down for more photos.] 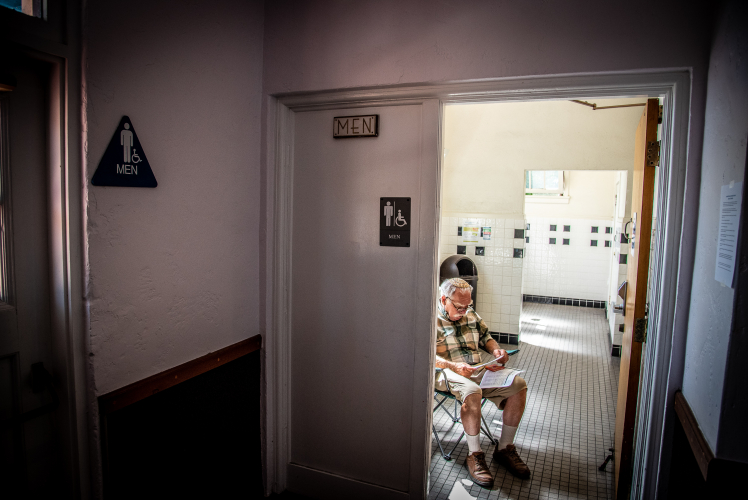 original image (3000x2003)
Demonstrators were able to gain entry to the restrooms today during the senior lunch service, when the doors are sometimes left open. They expected that attendants would arrive and lock the facilities back up after the luncheon was over, but that did not occur, and the public was allowed to enter the restrooms freely while demonstrators sat quietly by.

Gloria Rovay, who occupied the women's restroom for quite some time, noted that there were six stalls in that bathroom. She said that they would not see the same use now that the restrooms are being locked.

"This place has been around for a long time," Rovay said. "This is a community center. What has changed?"

Rovay said she believes the closure of the restrooms was motivated by a segment of the community that does not want to see or interact with homeless people.

"You can't cut out a piece of society," she said. "They don't want to see them anywhere."

As for reports of drug use, vandalism, and needle litter in the Louden Nelson Center, Rovay said the damage could have been done by anyone, and wondered how the center's staff knew it was from homeless people or drug users. She thinks that requiring members of the public to sign in at the front desk in order to gain access to the restroom code could be a quick and easy fix to the problem, as opposed to going to the trouble and expense of hiring bathroom attendants, which has been proposed by some in the community.

Rovay also thinks that public drug use has been on the increase downtown due to the remote location of the local needle exchange, which is presently operating out of the County Health Center. Rovay thinks there should be syringe services downtown, which would reduce the number of discarded needles.


For more information about the effort to re-open the restrooms at Louden Nelson Center, see: 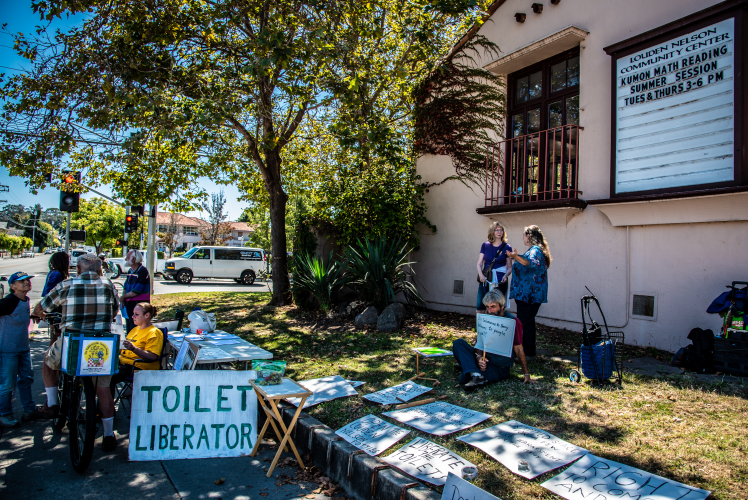 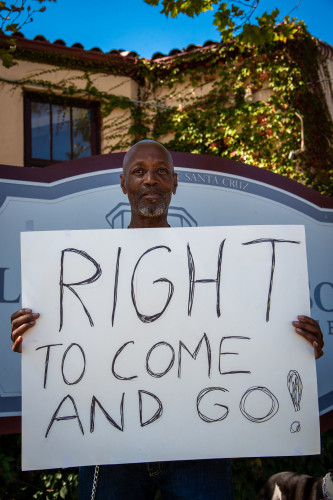 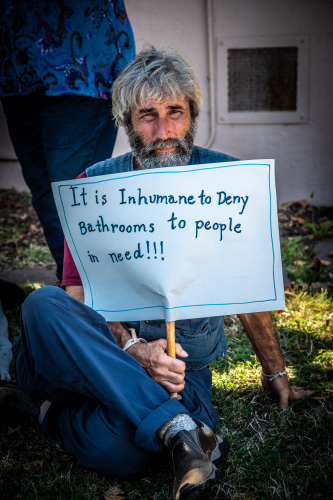 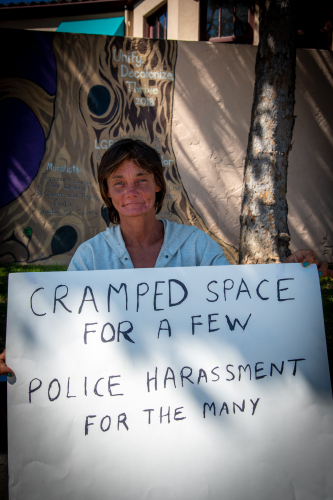 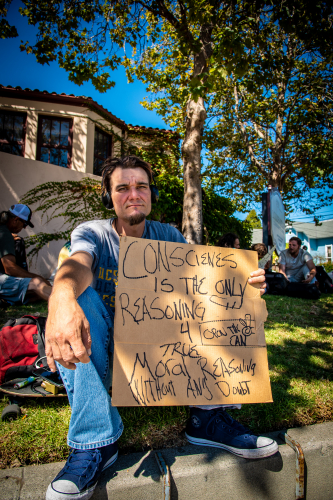 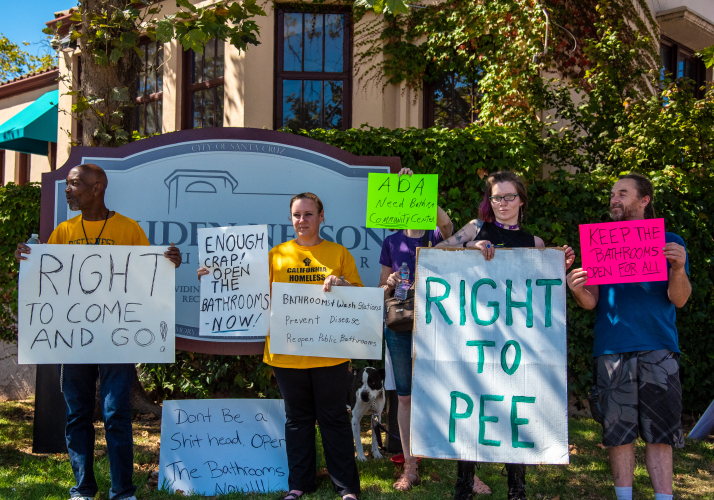 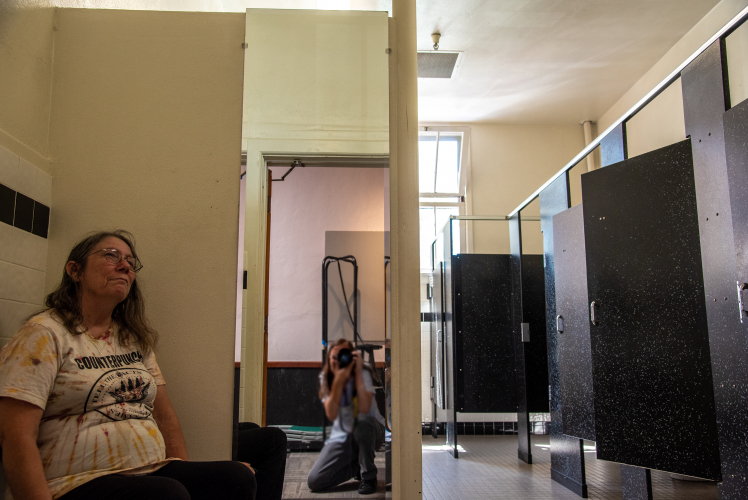 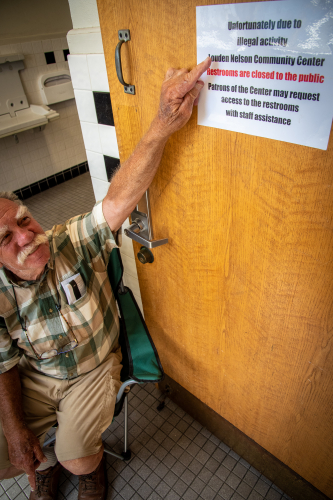 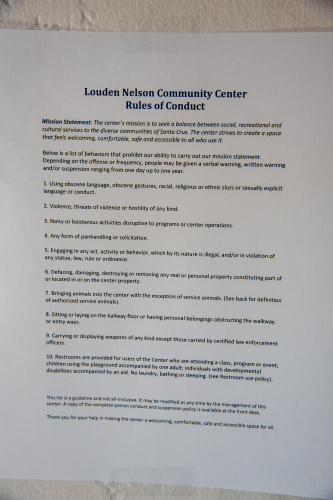 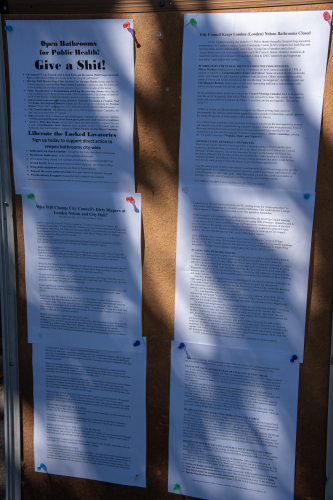 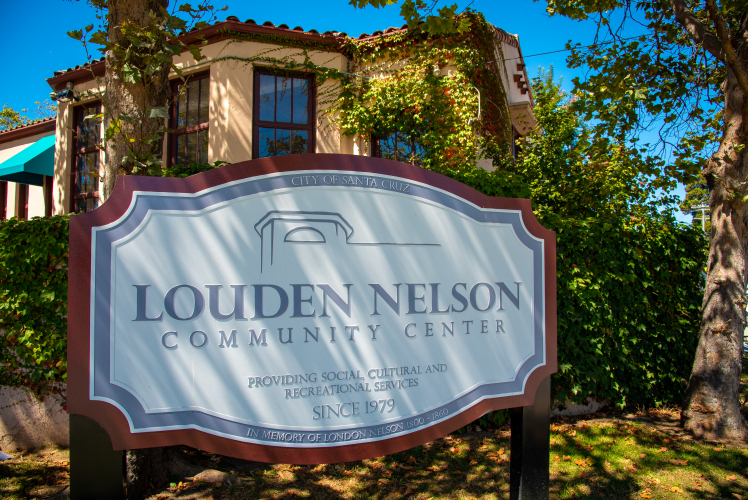 original image (3000x2003)
http://alexdarocy.blogspot.com/
Add Your Comments
LATEST COMMENTS ABOUT THIS ARTICLE
Listed below are the latest comments about this post.
These comments are submitted anonymously by website visitors.