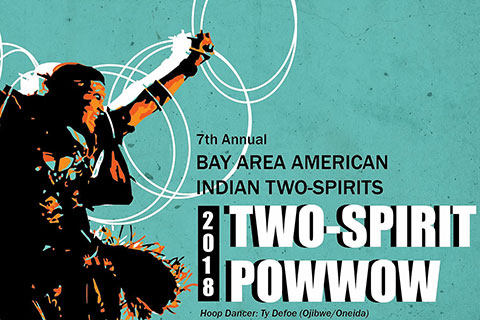 Tsunami Huerta shares a personal account of the February 3, 2018, San Francisco Two-Spirit PowWow: I'm being whisked to a PowWow. We zip along San Francisco's waterfront. I inhale the fresh sea air and hear seagulls squawking. The Two-Spirit PowWow, to over simplify, is a LGBTQ PowWow. LGBTQ fluidity may be new in a sense for we modern inhabitants of the U.S. these last few centuries, but not at all, for most, very ancient Indigenous cultures here! They/we, were accepted as an important, integral and sacred part of the community at large.

At this PowWow the stronger emphasis is put on just showing up and bravely being yourself, far more so than actually competing. There are many shy people dancing in the big circle barely moving their feet. And I found myself unfairly judging them at first until I finally realized that this PowWow circle was an especially safe and sacred space. Here everyone was invited to be completely and exactly themselves in this precious moment.