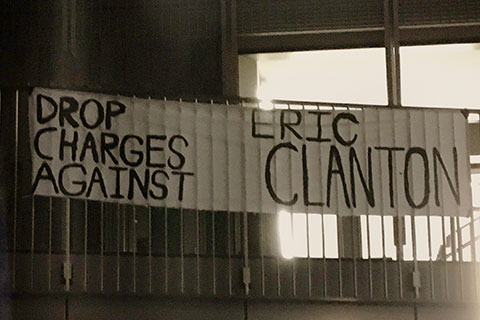 Eric Clanton writes: I’m currently facing years of prison time as the result of accusations made in the most shockingly hateful parts of the internet. On April 19, I began being targeted by a dedicated swarm of internet trolls known for spewing racism, xenophobia, and misogyny onto the web. Suddenly a hit piece by Milo Yiannopolis caused the targeting to go viral. Several old social media photos were posted, online accounts hacked, addresses published, hundred of calls to my employers, and countless threats of physical violence made against me, my coworkers, friends and many others. This harassment campaign is where the accusations against me originated.

Dealing with an unintelligible internet force smearing and threatening me online was not easy, and created stress to say the least, but I had every expectation that very few people would take them seriously, especially considering the character and credibility of their sources. However, five weeks later the Berkeley police smashed into two houses, held guns to peoples’ heads, handcuffed, verbally abused, and stole the belongings of over a dozen people including books and zines.

See Also: Banner Drop at UC Berkeley Calls for Action and Solidarity with Eric Clanton (It's Going Down)